The Shoot The Bull Thread

Actually I am getting a bit of cabin fever its windy raining off and on and a lil too bad to sit out. I really dont realize how much time I sit out until something like this. Oh well maybe a frosty pint will help we will see.

I had my Frosty pint with ice cream Thursday afternoon when I took the boat out. 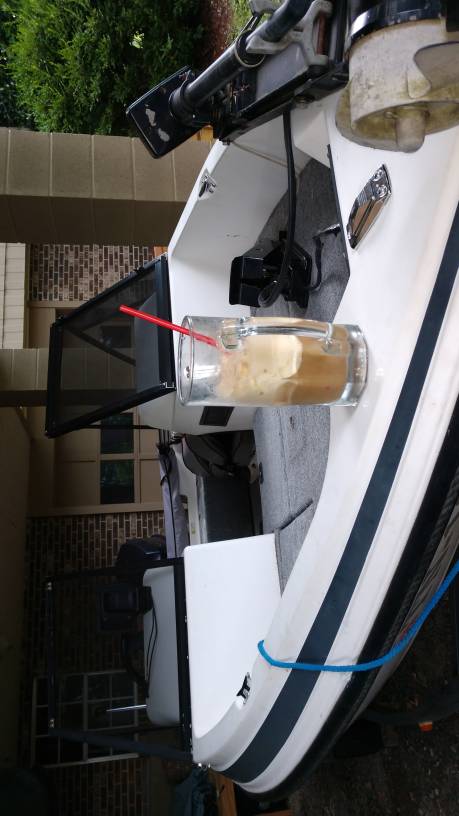 That was 2 pints with almost a quart of ice cream. 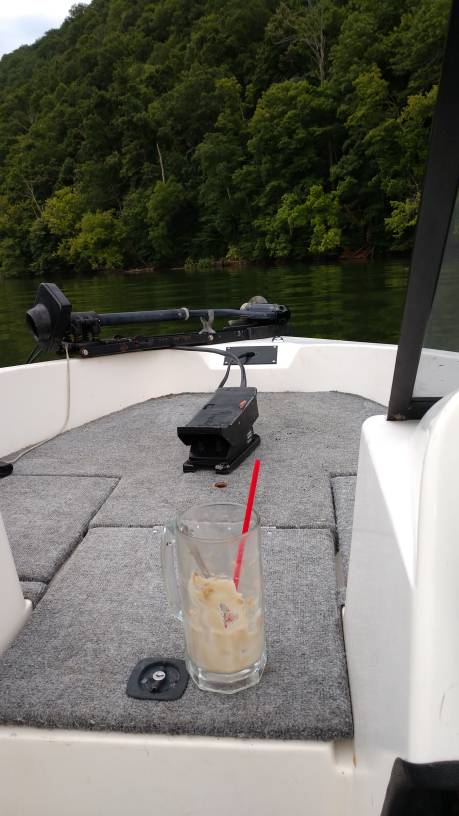 I made it last awhile cause the fishing wasn't very good.

Pink marble used to be quarried in this area.

this used to be one of those quarried. When they damned the lake, in 1945, it floaded the quarrie, but I think the business went under during the depression of 1929.

This is looking at Short MTN, I like the wisps of clouds hovering on it, that's why they called the smokey mtns. When I was in my teenage time, I almost ran a car off the old dirt road that runs up to those towers. Umm well, I was a stupid teenager doing stupid stuff.

Hang in there and don't float away Cappy.

STILL raining. Flash flood warnings for surrounding arias and hopefully we will not become an island it has happened before I would hate to be caught away from stores for too long I am down to 3 beers. Of course those fo you who know me well know that I have other options,

ARRRRRG! thunder rumbling as I type. Got up ad coffee thought I would go out and pick up branches ans such to clear the yard for mowing later. Got dressed had coffee took my medicine and while in the bathroom Peg said guess what? It's raining. 4 days way over a foot of rain and now its raining??

Well it took a whole stinking week but I finally have all the branches picked up and pieced apart for the fire pit reason it took so long it kept raining and the yard has to dry some for us to walk through it, Even then I still made some muddy prints on the grass. One thing weather guys forget when giving humidity readings is local evaporation. I garontee yall the humidity in the yard is 100% with the yard giving off steam as it dries. It took me a week to pick up and cut up one wheel barrow full of branches. Now if it dont rain this evening and tomorrow I can finally try to cut the jungle

Got home yesterday morning, slept 4 hours then mowed parents yard. Hooked up boat and we played on the lake till dusk. 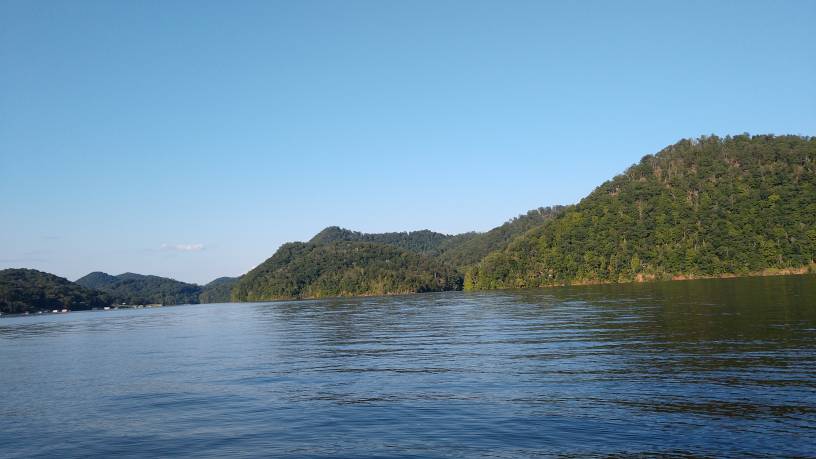 Watched the last season of Game of Thrones, on a suspected pirated CD, my wife purchased.? Loaded the bicycles about 1am, after I fixed a flat tire on my wife's bike. Hard to believe a thorn would penatrate a tire.

We drove to Damascus Va this morning to ride the Virginia Creeper trail. It is a relaxing 17 miles, mostly down hill. 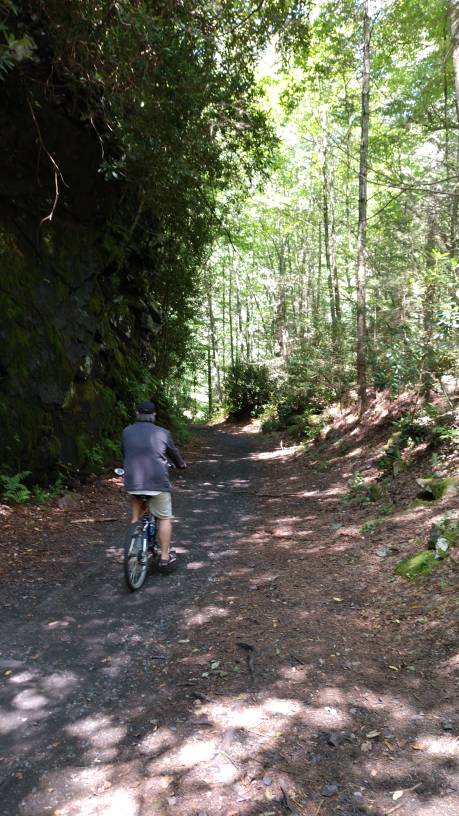 that's my best side riding around a bend. 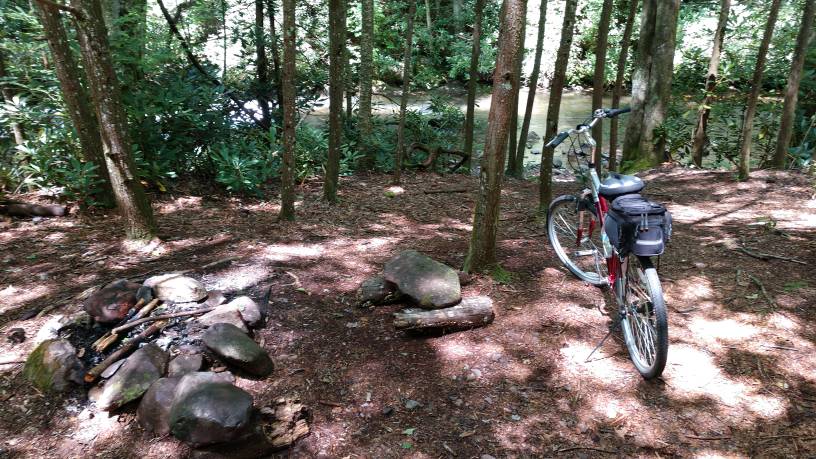 there are some nice places to camp along the trail. 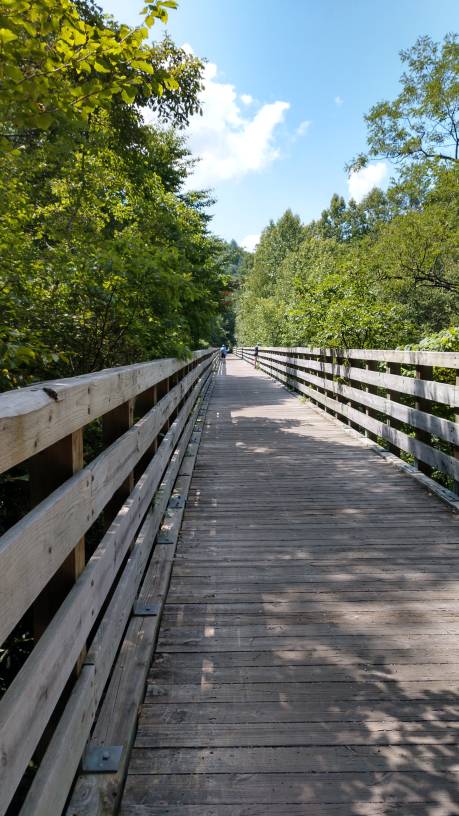 We took the boat out Saturday evening to watch the sunset and get a good view of the stars in the night sky. I took a thick fluffy sleeping bag so wife could lay on it. She was comfortable on the back of the boat untill dark and then it became a bug fest because of the white anchor light. she moved to the front of the boat and leaned against the windshield to escape the buggy-ness. The stars were amazing. We laid there untill midnight drifting around looking at the milkyway and listening to a screech owl some where not to far from shore. It was a wide area of the lake, and the other boats that were out there were tucked near the banks fishing. There was no breeze, and everything got wet from the heavy dew falling. It was a pleasant relaxing evening. Yesterday afternoon I lots of bugs stuck to the back of the boat. I guess the dew was so heavy that they got suck in the juicy-ness of it.

Red bean Monday down here so we been having a pot simmering since this morning. I got home just before the thunder storm luckily stocked up on dry goods and a few groceries. Got armour Vienna sausages 2 for 1$ not bad priced. Got me some unsalted roasted [peanuts for 2$ a lb Not bad prices so I may celebrate the soggy weather with a 6 pack. Sposed to dry up later this week just in time to mow and do yard work I am ;looking for wards to getting it done fore it turns into a jungle mean time we are cleaning and getting the camp;er ready Fall cant be far away face book is full of football memes

Hit the river after work this morning. Took the little canoe because it be easier to paddle in current.

caught a nice bronze back while wading around this island

. I found some nice river rocks for a fire pit I want to make.

Going to take several loads for enough. I had more than that in that little canoe. It was a nice day to be out

I finished my bookcase project,

so now I'm free to start another one. I'm still thinking about making some sort of camping bag/tote where I can keep stuff organized with out digging around to find things. Going to kick ideas around this coming week.

Took canoe out yesterday morning. I thought I would load up on some more river stone that I found last week.

there was a nice cool fog on the water, but I knew it would soon get hot out.

The island where I've been getting the rocks from is little over a quarter mile up stream. It's not far up, but the current is a continuous battle. It took me maybe 30minutes to paddle up. Fished a little bit, but my goal was for the stones. 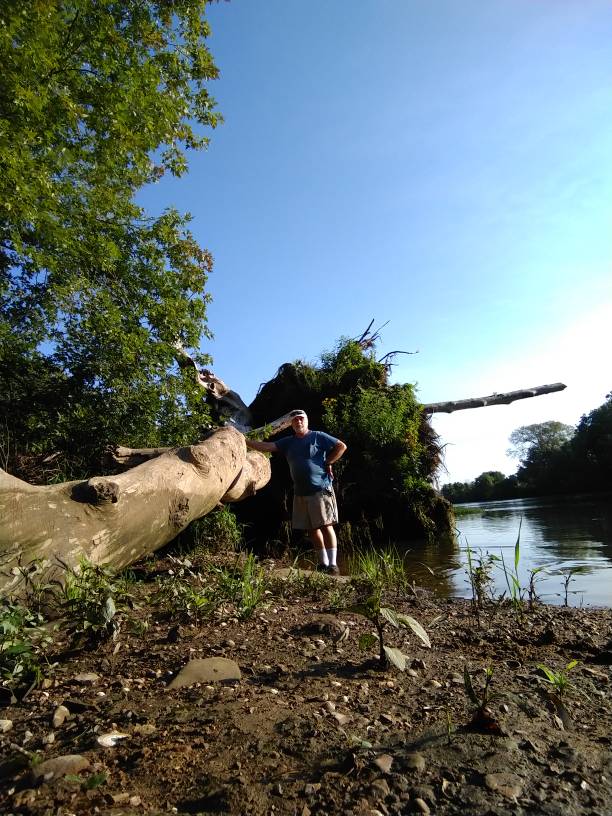 this up rooted and washed up tree is a reminder of how brutal this river can get in heavy rains. 10 miles up 2 rivers come together to make up this one.

this is 3 loads of stones that I've hauled in my little 13 foot canoe, little passed it's weight limit. Lot of work for a fire pit.

Picking at my camping tote design. Still running ideas of it through my head as I go. Going to be 24 wide, 20 tall and 13inches deep. If this size works then I will look at different material construction?

Nice start I assume you put thought into size and dimensions. It seems kinda tall for its size but I understand that also depends on how and where you Cary it makes sense to take up less space that way. also the gear ya plan to store into it comes into play when size is considered. I assume you will put in handles will you be able to see over it when you are carrying it?? Guess that comes into handle placing.

Cappy said:
Nice start I assume you put thought into size and dimensions. It seems kinda tall for its size but I understand that also depends on how and where you Cary it makes sense to take up less space that way. also the gear ya plan to store into it comes into play when size is considered. I assume you will put in handles will you be able to see over it when you are carrying it?? Guess that comes into handle placing.
Click to expand...

I figured my fry pan would sit flat against one of the sides with the handle pointing up, and then I gave it a couple extra inches.

I pondered hard on the dimensions.

I got tired of digging around for simple stuff, and when everything is stacked it does jumble things up. Everything has a place, and back to it's place when it is not used. Picking at it a little at a time. If it don't work out, oh well.

I greatly appreciate you letting us watch your plans come together

Thank you. I don't have any big adventures to yak about right now, and I hope I'm not being annoying.
I don't plan on back packing this thing any further than a couple of hundred feet from boat or vehicle. If it works out then I was going to figure out a way to seal the exterior from moisture, and make some kind of a canvas cover for it.

I look forwards to seeing it. August is our least active month. WE mostly hunker down hiding from the horrid heat and humidity. It's bout all I can do to keep the grass cut and cause of all the rain I aint been able to do that lately. I did pick a half gallon of muscadines Yesterday and some peppers and such. I am mostly writing I am in the middle of writing our second space opera but nothing to show as its all on my laptop and rest assured unlike most of my posts here it is well edited

A dry front came through last night they called it a cold front but its still over 90F so the big thing it did is drop the humidity. The air feels drier but the yard and grass is literally steaming. Hopefully dry will continue for a couple days I plan to mow tomorrow and hopefully get some much needed yard chores done now that it is dry enough to walk around out there, Lord willing it wont be long till we can clean out the camper and begin our fall and winter play time.

Grandma and I are road tripping again. Couple nights ago we camped on Marsh Creek, one of the tributaries of the middle fork of the Salmon in Idaho. Our collected water was froze a half inch thick. By 8:30 the dash temp said it had warmed to 31. Last night and tonight we are on a tributary to the Little Salmon between McCall and New Meadows. It's 81 degrees. It was 55 this morning by 9:00 am.

That sure sounds like a blast Grandpa. Did you stop at Dagger falls? Maybe that should be on my bucket list. I hope you and Grandma have a great time.

No, we were 25 miles upstream from dagger. But the 40 mile road around to dagger falls is gravel and this time of year, very washboardy from the boat trailers bouncing. But that road winds through Ayers and Poker meadows and is a beautiful drive.
You must log in or register to reply here.
Share:
Facebook Twitter Reddit Pinterest Tumblr WhatsApp Email Link
Top